In 2006, Cy Twombly was chosen to decorate the ceiling of the Louvre’s Salle de Bronzes, becoming the first contemporary artist to receive a ceiling commission at the museum since 1953, when Georges Braque executed Oiseaux for Salle Henri II. Completed in 2010, Ceiling (Le Plafond) departs from the artist’s signature trembling line while retaining other characteristics of his pictorial language. Twombly treated the ceiling as an easel painting of monumental dimensions (4,300 square feet), a surface he filled with an almost monochromatic blue field, evoking the sky and recalling Giotto’s Arena Chapel. Simple, geometric motifs trace the ceiling’s contours, while inscriptions naming seven sculptors from ancient Greece invite the visitor for a walk around the gallery.

This paper will show how Twombly participated in the long tradition of ceiling painting by building a strong connection between the space, content, and context of the room – a site where the viewer plays a decisive role. With a rare example of monumental XXI century painting, sited where one might not expect to encounter abstraction, Twombly made his entrance into the Louvre’s pantheon of great artists, gaining, as one critic put it, “33 meters of immortality.”

Above and Beyond: Ceiling Painting in the History of Art at The Frick Collection, New York
Thursday June 27, 2019
The symposium is free, but registration is required. For more information, please click here 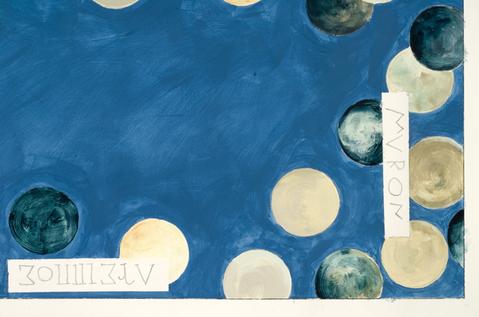